Natural ways to relieve a migraine

Experiencing a migraine is different from simply having a headache. A migraine is typically a more severe headache that lasts for longer (for a few hours or even days), often felt on one side of the head and forehead. It is sometimes preceded by an ‘aura’, sensory disturbances that often affect your vision – for example, seeing flashing lights or experiencing blind spots. That’s why you might hear people refer in medical terms to migraines ‘with aura’ and ‘without aura’.

For some people, a migraine may also be accompanied by symptoms such as increased sensitivity to light and sound, feeling sick or even vomiting.

According to NHS England, around one in five women and one in 15 men experience migraines. The causes of migraines are not yet clear, but they could be the result of temporary changes in the nerves, chemicals and blood vessels in the brain.

Some people who suffer from migraines also find they have a particular trigger, such as getting their period, feeling stressed, being very tired or eating certain foods. A propensity to have migraines can also run in families. 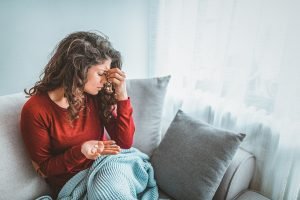 One way to treat the pain of a migraine is with over-the-counter painkillers such as ibuprofen or paracetamol. However, not everyone will want to do this, or they might not wish to do so every time, particularly if the headaches or migraines are frequent. (It may also not be recommended for some people to take certain painkillers: for example, if you have stomach, liver or kidney problems.)

If you are experiencing migraines, speak to your doctor, who can advise on possible causes and safe levels of pain relief.

Are there any natural ways to treat migraines?

There are lots of ways to respond to a migraine and to attempt to manage it – one of the most instinctive responses is to lie down in a dark, quiet room. However, to date, there is no single cure for migraines.

One way to respond to migraines could be pro-actively seeking treatment of some kind before the migraine starts, or seeking to remove the triggers that cause your migraines, such as eating certain foods or drinks. However, this is obviously harder with certain triggers, such as stress or having your period.

Levagen+  is a remedy made from palmitoylethanolamide or PEA: a fatty chemical that’s widely found in bodily tissues. PEA is created naturally by the body, including in response to pain, stress and injury. It’s also present in foods including soybeans, peanuts and egg yolks.

In one 2020 study, the ingredient Levagen+, a clinically studied, bioavailable form of PEA, was shown to offer equal effectiveness to ibuprofen as a headache treatment.

In fact, Levagen+ was faster than ibuprofen in resolving severe headaches, while ibuprofen performed better for people with moderate headaches.

These results may support use of Levagen+ as an alternative in place of pharmaceutical treatments, though more research is needed.

However, Levagen+ is gaining momentum as an alternative to CBD (cannabidiol derived from the Cannabis sativa species) which is often also used for natural pain relief, but not everyone is comfortable using it.

Magnesium deficiency is known to be linked to headaches and migraines. Some scientists suggest that magnesium helps to block signals in the brain that otherwise lead to migraines, particularly those that also affect our vision and senses.

If you are suffering from migraines, it’s worth looking at the magnesium content in your diet. This includes headaches related to getting your period – as some research has linked the onset of a migraine to lower levels.

We typically get this vital mineral from eating plenty of magnesium-rich foods in our diet, such as nuts and seeds; beans and dark-green leafy vegetables are also a good source. For a more significant magnesium boost that might help reduce a deficiency, consider a magnesium supplement, such as Nature’s Truth Magnesium Softgels, which are easy to swallow.

Some people believe that breathing in the scent of lavender oil helps to alleviate migraine pain and the severity of headaches, including if inhaled in the early stages of an attack. It’s a claim for which further scientific evidence is needed.

Lavender essential oil can be applied topically to the skin (but only if first diluted with a carrier oil), or enjoyed with the use of a roll-on, which is easy to apply to your temples and use on-the-go. You can also try a diffuser to dispel the aroma into the air, or, if you don’t have one to hand, use a lavender mist spray.

Can peppermint help with migraines?

Peppermint essential oil is associated with focus and mood-lifting qualities.

But peppermint could also be of interest to people who suffer from migraines. One 2019 study in the USA suggested that use of peppermint oil might help to reduce the intensity of migraines, though further studies are needed.

Avoid applying topically without first diluting with a carrier oil – or reach for a diffuser or oil burner to reap the rewards as explained above.

How to keep your gut healthy

Understanding PCOS and how supplements can help

The fitness expert’s guide to running for beginners

How to boost your energy levels & beat tiredness

How to prepare for allergy season