The use of the cannabis plant has grown well beyond its, ahem, stereotypical purposes in recent years. Hemp – a type of cannabis that won’t get you ‘high’ – is now found in many beauty products, relaxation drinks and nutritional supplements. When it comes to the latter, it’s the oil pressed from the seed of the hemp plant that is put to use – aka hemp seed oil supplements.

A rich source of fatty acids, including omega-3 and omega-6, hemp seed oil is believed to be good for heart health, controlling blood pressure, improving skin health and reducing inflammation.

But is hemp seed oil any better than fish oil-derived omegas? Does it have any unique qualities? And how does hemp seed oil differ from other cannabis-derived products? Read on to find out more.

Also read: Which supplements should I take daily?

Is hemp seed oil the same as CBD oil?

In a word, no. Hemp seed oil is not the same thing as CBD oil – although it’s understandable why there might be some confusion between the two.

Cannabis and hemp are two varieties of the plant species Cannabis sativa. CBD, or cannabidiol, is a chemical naturally found in the cannabis plant, whereas hemp seed oil is made from pressing the seeds of the hemp plant.

Crucially, neither contains significant levels of tetrahydrocannabinol, often referred to as THC. This is the substance that causes people to feel ‘high’ after ingestion. Without the THC in hemp seed oil, users can reap the other benefits without any psychoactive effects.

Hemp seed oil is mainly used for its nutritional benefits.

What are the benefits of hemp seed oil?

Hemp seed oil is believed to have a wide and impressive variety of health benefits, much of which is supported by robust scientific evidence.

These include its powerful ability to reduce inflammation, thanks to the fact that it’s rich in gamma-linolenic acid (GLA). This omega-6 fatty acid is thought to play a role in lowering inflammation and fighting cell damage. It’s thought GLA might also help with combating the symptoms of acne and eczema, as well as PMS and menopausal symptoms.

In fact, hemp seed oil is rounded in its omega offerings, as it’s a great source of omega-3, omega-6 and omega-9. Together, these fatty acids work to support cardiovascular health, brain development, bone health, and more. Critical to so many bodily functions, it’s a good idea to get a healthy dose of omegas in your diet.

Also read: Which supplements are best for heart health? 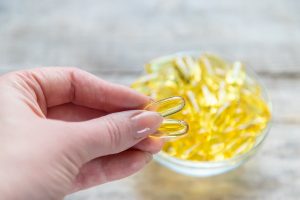 Hemp seed oil is a good natural source of polyunsaturated fatty acids, including omega-3s, which are typically found in oily fish.

This can make hemp seed oil an attractive vegan- and vegetarian-friendly supplement choice for people who don’t eat animal products.

Unlike some plant sources, hemp seed oil features a form of omega-3 called stearidonic acid (SDA), which converts to the omega-3 eicosapentaenoic acid (EPA) in your body.

In addition, hemp seed oil is a source of omega-9, while fish oil is not. (This non-essential fatty acid has been linked to lower levels of inflammation.)

For non-vegetarians, oily fish (such as salmon and mackerel) are often enjoyed regularly as part of a balanced diet, while hemp seed oil is often taken as a supplement. That said, even many fish-eaters choose to take a supplement to reach the recommended levels of omega-3 fatty acids in a healthy, balanced diet.

When shopping for hemp seed oil, you will find that you have the chance to opt for a cold-pressed oil, such as Nature’s Truth Cold Pressed Hemp Seed Oil 2000mg.

Which supplements should we take for optimal eye health?

What are the biggest wellness trends of 2022?

Is vitamin D really that important? True and false…

Do hormones affect our digestive systems? True or false?

Which supplements are best for heart health?